Since 1995, Fullpower Electrics has been providing
expert electrical services to residents and businesses

Terpstra Enterprises, owned by brothers Henk and Steven Terpstra with their father Steve, commenced trading in 1991 with the installation of underground power mains services and wall chasing for electricians and their customers.

After a few years many customers expressed a desire for more than simple underground mains services, desiring to focus their business on their core work while seeking support from Terpstra Enterprises for all the ground work and strata electrical in its entirety. Due to this electrical component, Fullpower Electrics was born as a subsidiary of Terpstra Enterprises.

The family was blessed with work and the business was able to flourish to an extent that each of the three directors were able to take on a role in different divisions of the company. However, 2007 Steve Terpstra retired from the business, and the decision was made to close down the underground power mains division. This was also the moment that Fullpower Electrics (WA) Pty Ltd was established. Brother Peter joined Henk as director and Steven went on his way with the wall chasing side of the business, now branded Enviro Chasing Services.

During the next few years Henk and Peter were able to concentrate on the core business of providing exemplary support, service and electrical installations to their network of builders and developers. This has been blessed, and in recent years Fullpower Electrics staff have been excited by the addition of split system air conditioning, fire detection, intercoms, security and solar panel installations.

As a family based company, and with the inclusion of the next generation of bright young minds, we look forward to providing premium licensed electrical services for generations to come. 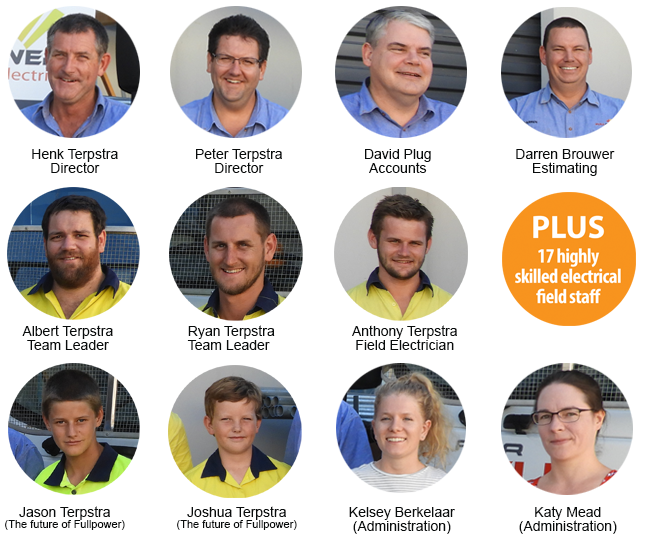 Peter provides much advice and direction for Fullpower Electrics clients as they grapple with the sometimes complex issues surrounding connection to the grid and other electrical issues. Once this is all sorted out, Darren (who began working with Fullpower as an apprentice electrician in 2003) provides the technical support and the quote.

The work in progress is performed by all the field staff under the able and capable direction and supervision of qualified Team Leaders, who are ably supported by motivated and energetic electricians, apprentices and office staff.

Every day we provide premium, licensed electrical solutions to our preferred network of quality clients. This means we:

Our vision is to be regarded as the electrical contractor of choice in the small development and building industries, attracting people desiring to reach their full potential within this environment.

Powered by peope who care

Read what some customers say about Fullpower Electrics

As a company you did a great job…which was refreshing to see. You did what you said you were going to do, from quotation stage through to executing the work which is highly commendable. John Black, Serpentine

Thanks for a great job. I will be using you on future projects. John Hill, Victoria Park

Guys turned up on time, job is done and power back. Thanks to all of you at Fullpower for the good service. Gerry West

It is such a pleasure to come across two young tradies that are so professional, polite, clean and hard working as the two young gentlemen that we had doing our house wiring. They are a credit to your company. Craig Guthrie

CALL FULLPOWER TODAY ON 6330 8800 TO GET YOUR ISSUE RESOLVED